Two weeks ago I was a normal 26 year old girl. I was living in Pittsburgh with my amazing fiancé, working at a job I loved, raising a crazy puppy, planning a fabulous wedding for next year, and trying to sort through family feuds to make the holidays not such a fight. Two Thursdays ago my life changed forever!

I felt a lump in my right breast earlier this year around the time of my leg reconstructive surgery. I went to my doctor like I was supposed to do, and she said it was normal. “You’re young, cancer doesn’t run in your family, it’s just along the milk duct, these things happen”. In my heart I knew it wasn’t right, but it was so relieving to hear from a doctor that it was okay. I actually remember going home and joking to John saying “My tumor is okay!” Not even knowing it was a tumor. 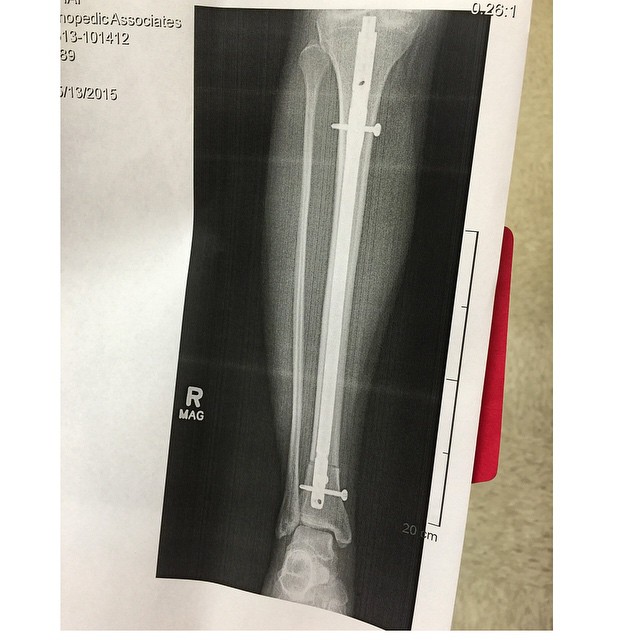 Months went by and I was healing from my leg surgery, when I noticed the lump was getting bigger. If people hugged me, I felt it, when I would touch it, it felt noticeably larger! It didn’t move as much as it used to, and it felt so sore! I knew something was wrong. I remembered the advice my doctor had gave me, “when it is sore, massage it and use heat”. Anyone who works in healthcare knows you never massage or use heat on cancer because it could spread. But, a doctor told me to do it.

Two Thursdays ago I called my doctor again and they told me they were booked till the end of the month. I called my PCP, told my boss I had a doctor appointment and had to leave early, and around 4:00 pm on October 18th my PCP was rushing me for a STAT ultrasound of my breast. She immediately sent me downstairs thinking I could get it done right there at her facility, but the doctor on staff had already left for the day. I was referred to the Breast Cancer Center at Allegheny General Hospital in Pittsburgh for an appointment the following day.

It was a longggg night waiting for a call in the morning about an appointment. Friday finally arrived and I had to be up early for an appointment at my orthopedist for my leg. Good news! That X-ray went well… “On the X-ray the bone is healed!” the doctor announced. Then why am I still having pain?  The doctor explained, “You have tibial stress syndrome, but this is a small complication compared to what could’ve happen through the recovery for this procedure”. They ended up casting my leg in a beautiful rainbow dinosaur cast with glitter that John had so graciously designed! I was told to remain non-weightbearing for two weeks using crutches then come back for a followup appointment.

After that appointment I immediately headed over to a walk-in ultrasound because they didn’t have any scheduled appointments. I was told to follow the signs to the “Cancer Center”.  With John by my side, I hobbled my way across the parking lot following the signs and I remember saying to him, “don’t worry it’s only called the cancer center because thats where they do these tests”.  Looking back, I think deep down I sort of had a feeling that something was way wrong.

We followed the signs and ended up in the Breast Center.  I can not rave enough at how amazing that staff was.  Being October, (that’s breast cancer awareness month for anyone who doesn’t know) they were all wearing pink, had smiles on their faces, and were so kind to me.  I was trembling in sparkly dinosaur cast… but they made me feel so comfortable.

My name was called and I was escorted back to a changing room.  After I changed into a typical hospital gown, I was asked to sit in the patient waiting room.  As I scanned the room, it was me with about 5 other older women all dressed in the same hideous, bland gowns that they expect patients to just feel okay about wearing!  Whoever invented that pattern is seriously mistaken because there is nothing more degrading than thinking you may be sick and having to change into a bland gown that every other sick person is wearing.  (This is next on my list to be changed.. stay tuned 🙂 )

Soon after sitting in the patient waiting room, I was taken back to the ultrasound room.  The tech was amazing, she instantly calmed me right down and made me feel comfortable pulling out my boob, putting warm gooey gel on it and rubbing the ultra sound wand all around.  I knew something was instantly wrong when she said she would be right back she just wanted to speak with the doctor.  She returned and said she was going to do a mammogram.

I’ve heard so many scary things about mammograms.  How they hurt so bad, the machine squishes your boob yada yada… Here’s the real truth!  The machine needs to be completely re-invented, a man totally created it (sorry guys). It’s nothing I ever imagined.  I would have thought it was something with two cut outs that you slide you boob into and it squishes and takes pictures… WRONG!  It is simply this plate that moves in all different directions with a table that moves up and down. Literally you lay your boob on the table (girls like me with lack there of… this is quit a difficult task), then the tech pulls your boob while the cold metal plate literally comes down and makes a hamburger of your tit!  Oh! And even better, you don’t have to just do one quick picture, the machine moves all around so they literally have to go around your boob with this plate and squished plate smashing your boob (and in my case tumor)!  Okay, it sounds bad on paper and anyone that knows me may know I might be being a tid bit dramatic… it doesn’t hurt as much as I expected. Actually it really wouldn’t have hurt at all if my tumor wasn’t so sore to touch.

Next I went back to the ultra sound room, the tech went to find the doctor and they both returned to the room.  A man in a white lab coat with a bandaid on his nose, bald head, and bright spunky attitude entered the room.  In the back of my mind I just knew they found something.  This very outspoken man introduced himself as Dr. Pollard and immediately said, “hold on i’ll be right back, I have to pee”.  Obviously he knew I was scared out of my wits and this was just the person I needed to enter and make me smile!  Upon his return, I joked that I hope he washed his hands and he very frankly said “we found something”.  He asked who came with me and brought John back into the room.  As John entered and came to hold my hand I burst into tears.

Dr. Pollard explained that he wanted to perform a biopsy.  He began prepping the room and nicely ordering his tech and assistant to obtain the items he needed to make the room sterile.  John was asked to step out and before he left he grabbed my hand and kissed me on the head saying “we’re going to get through this”.  As I laid staring at the ceiling with tears falling down my face… there was fear of the uncertain, but I have yet to be fearful or scared that something is out of control or so terribly wrong that there is no return… basically from the beginning I knew that “every little thing is gonna be alright” — Bob Marley reference 😉

Dr. Pollard explained that they would be using local anesthesia (meaning a needle in my boob with a numbing agent) and ultra sound guidance (meaning the ultra sound was their eyes).  He explained how they were sampling 1 lymph node in my axilla (or near my arm pit) that seemed to be swollen, and the main tumor (which is positioned more toward the center of my chest in my Right breast).  As the needle for the numbing medicine jabbed back and forth, Dr. Pollard’s tech was holding my hand and coaching me to breath.  I sat as still as possible with my right arm positioned above my head as they gathered the sampled that they needed.  Every time he reached a sample he could use, he would press on the needle and it would let out a click.  It basically cut off a piece of the tissue, he then pulled it out of my boob and placed it in a petri dish.

After taking six samples, I could finally breath easy because it was all done with.  They brought John back in, I got dressed and was told the results wouldn’t be in until the following Monday or Tuesday but they would be ordered STAT.  I left wearing ice packs in my bra throughout the day and with strict rules for no lifting more than 5 lbs… this also made using crutches practically impossible to use.  Now the pain of waiting had to begin…

The Girl Behind the Sparkle