This past Thursday, I was prepared to begin my first chemo treatment. John was able to take off work, my sister Samii was still in town, and my mom drove up just to be here and hold my hand.  I had a 10:45 am seat, however was instructed to show up an hour early so they could do my blood work and test my port being that this would be the first time it would be used. This was also the first time I decided to wear my wig in public! Lets just say it was a big day! As I entered my oncologists office in Allegheny General Hospital in Pittsburgh PA, the fear of the unknown began to take over.

We were on our way driving to the hospital in John’s “baby” aka “Riot” aka the Challenger with the music playing in the background.  We were about 5 minutes from the hospital and one song after another began playing on the radio. Whenever I find my self to be nervous or ready to face one of life’s unexpected events, my friend Ben who passed away when I was a Sophomore in high school always seems to let me know that everything is going to be okay through music.  As we approached the hospital, song after song boosted my confidence and settled all my nerves– thanks Ben for always being there for me!

As we exited the car and walked up to the hospital elevators, it was real life… I was heading to the Cancer Center for chemo! Me, Meghan Franz, and my 26 year old self… with my new husband and sister carrying all my bags for the anticipated day of my body being pumped with poison!  It is still so completely unreal to me.  We went up the elevator and walked into my oncologist, Dr. Raymond’s office.  It was still rather early so only a few other patients were also seated in the waiting area.  In that moment I became so self conscious like everyone was looking at me.  Did I look sick?  Could they tell my hair was a wig?

The truth is, I act strong because I don’t have a choice right now.  I mean, my sisters and I haven’t had the easiest of lives and thats the way I’ve always survived… to just be strong and get through things.  It wasn’t until I sat next to John and he grabbed my hand that I was able to calm down and let all my anxious thoughts subside.

I was called back and they initially took all my vitals.  I have lost more weight– initially I weighted around 130 lbs when all of this began, and now i’m down to 124 lbs (this seems to be one of the things that I am going to have to really be watching throughout my treatments).  They called my family back and escorted me to a treatment room.  I was greeted by smiling faces of the most pleasant nursing staff, but again I had an overwhelming feeling of insecurity as they sat me in a large green recliner and other older people were in their recliners receiving their treatments.

The first thing I noticed about the treatment room was the ceiling.  When I looked up, that had multiple different ceiling tiles that were engraved with fall leaves, it just added that extra touch of homey comfort.  The nurse came up to me and instantly made me feel comfortable and she invited my family to my side and reported that she would be explaining things in detail  so I wouldn’t have any questions.  She had that touch of being so calming with how she handled me, I was so thankful! 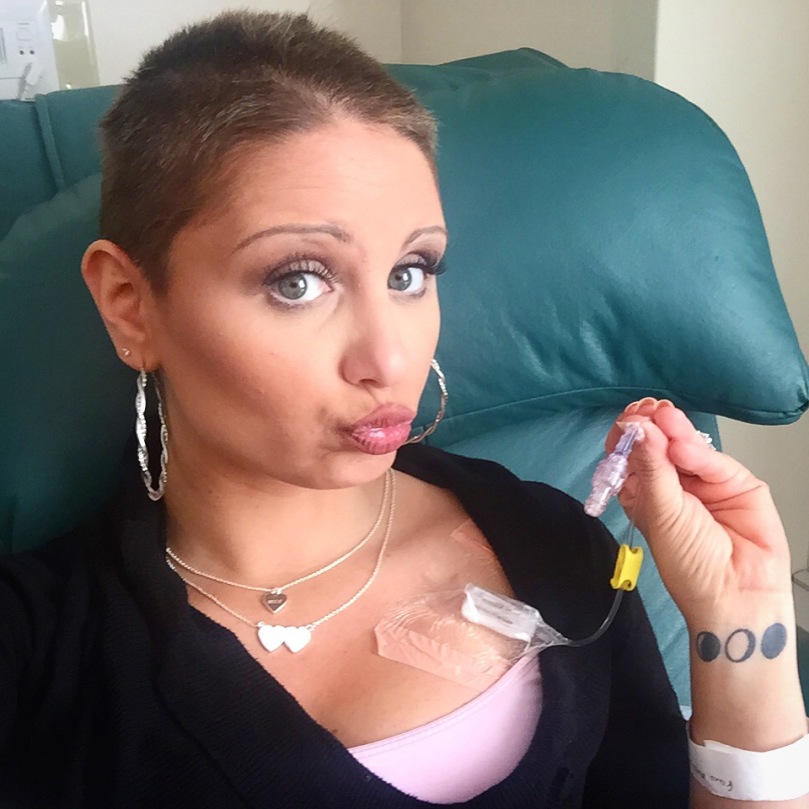 She told us that she would be accessing my port and it was a sterile procedure so I had to turn my head to the right side away from my left subclavian port site and “not move a muscle”.  She cleansed my port site and although I am still a little tender to touch on my port, it was more so I think I was nervous about it hurting.  After a few minutes of sterilization, she was ready to access the port.  Because I had to maintain my head turned away from the site, I wasn’t able to see exactly what she did but literally it just felt like she pushed a snap button against my skin.  It hardly hurt at all! So much less than an IV, and lord knows my veins were so thankful considering my hands are all blown tender!

Once my port was accessed, I now had little dangling IV’s hanging from my chest.  I guess in this moment it was real, I am a chemo patient.

I had an appointment with my oncologist while they were waiting for my blood work to return for baseline results.  I was greeted by Dr. Raymond with open arms and her eagerness to see our wedding video!  She answered all of my questions and is always just so positive!  It’s been a little overwhelming having such supportive family and friends and everyone seems to want to help by sharing research articles, diets, and fads, so it’s nice to have a doctor who understands how overwhelming it is some times.

I have decided to participate in traditional chemo treatments in order to shrink the size of my tumor and have a way to judge if the treatments are working and inhibit the cancer from spreading.  If I were to decide to do surgical interventions first, there would be no way to judge if the chemo is working because the tumor would be removed.  I am also participating in some holistic treatments including aromatherapy, organic diet and increased protein diet, as well as CBD treatments (blog post to come on more specifics).  Being in the medical field and understanding research etc.  I refuse to only go the non-traditional route for treatments because my cancer has already spread to a lymph node.  I have decided to use nontraditional methods along side with traditional medicine end of story:) (sorry to be a little forward but its been really bothering me how people have been reacting to my treatment decisions lately!).

Finally my blood tests were in and I was ready to begin chemo! They placed me in a seat in the corner of the treatment room, and I was instructed that only two visitors were allowed at a time— this in a way made me upset because I want everyone there with  me!  We tried to follow the rules… but in my world, rules are  meant to be broken :).  Initially my mom and John sat with me a bit as Samii was doing work on her laptop in the waiting room, then they switched out to go get lunch.

The nurses instructed me that I would be going through about an hour and a half of “pre-chemo” medications which included special anti nausea medications, an antibiotic, and steroid treatments.  All medications were run through an IV through my accessed port, and all I had to do was sit there for a kazillion hours!  I packed a bag of different activities to keep me company… one thing that was really annoying is there was no WIFI in the treatment area! Really!!! This must change!

About the third bag into my pre-chemo treatments, I was talking to my sister and mom and instantly felt my chest tighten.  I was nibbling on a soft pretzel but at that moment the pretzel was just sitting in my mouth.  I became a little bit anxious, then felt a warm sensation go up my chest and into my cheeks.  I could’t get any words out, but my mom knew something wasn’t right.  My sister Samii, for many of you that know her typically just brushes things under the rug and literally said “oh don’t worry she’s just choking on the pretzel”!  I decided not to instantly tell the nurse of my symptoms because I wasn’t sure if I really was choking or if it was a reaction— yes… i am a bad patient, i will admit! Samii called John and he was instantly by my side. This makes me super anxious because after my leg surgery in April I found out that I am allergic to so many different medications! Its scary!

The nurse walked by to check on me and I asked if there were side effects as to the episode I just had.  The nurses educated me to let them know whenever something “didn’t feel right”, or if I “didn’t feel well”.  She changed my IV bag and I instantly felt a “bubble-like” sensation in the center of my chest.  I explained this to the nursing staff who immediately went out to get a doctor.  It turns out that prior to my treatment they reached out to  my surgical oncologist who placed my port because when the nurse looked at my radiology the tip of my port was laying in the ventricle of my heart— this isn’t a big deal unless someone is symptomatic.  In my case, the nurses instantly began listening to my heart. I was rushed for a STAT chest x-ray and EKG and was diagnosed with cardiac arrhythmias.  All further use of my port was deferred and I was instantly scheduled for OR on Monday to fix my port.

Wish me luck from here on out… Fingers crossed for a few less bumps in the road.

The Girl Behind the Sparkle